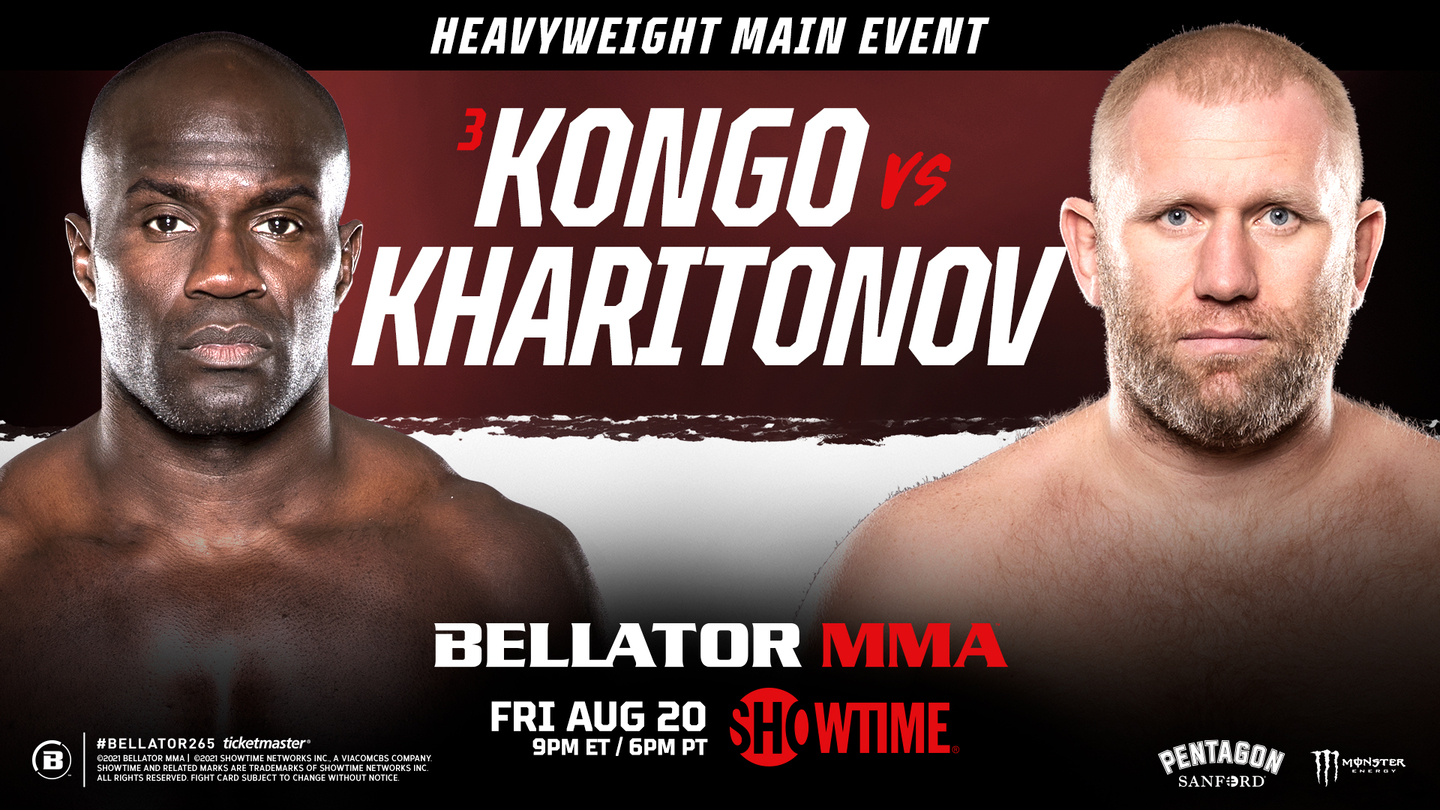 IN MAIN EVENT OF BELLATOR MMA 265 ON AUGUST 20 AT SANFORD PENTAGON IN SIOUX FALLS. ADAM BORICS AND JAY-JAY WILSON WILL ALSO MEET AT FEATHERWEIGHT FOR THE RIGHT TO CLAIM NUMBER ONE CONTENDER STATUS

The card has also confirmed top featherweights No. 3 Adam Borics (17-1) and No. 4 Jay-Jay Wilson (8-0) will meet for the right to face the winner of the BELLATOR Featherweight World Grand Prix Final between Patricio “Pitbull” (32-4) and AJ McKee (17-0), which takes place on Saturday, July 31.

Tickets for the event go on sale this Thursday at 10 a.m. CT and are available at Sanford Pentagon Box Office & Ticketmaster.

The preliminary portion of BELLATOR MMA 265: Kongo vs. Kharitonov currently features a flyweight bout pitting No.5-ranked Alejandra Lara (9-4) against DeAnna Bennett (10-7-1) and will begin at 6:00 p.m. ET/3:00 p.m. PT and stream live on the BELLATOR MMA YouTube channel, SHOWTIME Sports YouTube channel and Pluto TV. Additional preliminary bouts will be announced in the near future.

Holding an impressive MMA record of 30-11-2, 1 NC, No. 3-ranked Cheick Kongo returns to action for the first time since headlining the first-ever major MMA event in his native France last October. The former kickboxer remains a force to be reckoned with and holds records for the most fights (16) and wins (12) in BELLATOR heavyweight history. With high-profile victories over Vitaly Minakov, Mirko Cro Cop, Antoni Hardonk, and Matt Mitrione, the Parisian is keen to pad his current promotional records, set new ones, and earn his shot at BELLATOR gold.

The man nicknamed “The Paratrooper,” Kharitonov is the owner of an equally notable MMA resume, with the Russian scoring vicious wins against some of the sport’s marquee names, such as Fabricio Werdum, Andrei Arlovski, Pedro Rizzo, Murilo “Ninja” Rua, Matt Mitrione, and Alistair Overeem. Now, fresh off two championship victories on the regional circuit, Kharitonov returns to the BELLATOR cage with the intention of climbing the heavyweight rankings and asserting himself as a BELLATOR title contender.

28-year-old Hungarian Adam “The Kid” Borics has won 17 of 18 fights to begin his professional career, bouncing back from his only loss with three straight victories. Training out of South Florida’s Sanford MMA gym, Borics has firmly established himself as a true threat to anyone in the 145-pound division, where he is currently ranked third.

Undefeated in his first eight fights as a professional, New Zealand’s Wilson has won in style, accumulating six finishes in those eight wins. Following a split decision win against Tywan Claxton, Wilson scored a violent knockout of Sergio DeBari, then followed that victory up with an equally vicious spinning backfist stoppage over SBG’s Pedro Carvalho in April. The Kiwi fighter will be looking to secure a high-stakes victory over Borics with a world title shot awaiting the winner.